Today is World AIDS Day, and for the last six years Kristin and I have lived and worked in Zambia and spent four of those years primarily ministering with and through the CROSS Project HIV/AIDS ministry in the compounds of Lusaka. This has been a distinct privilege and also a heart breaking reality at times. On World AIDS Day, let us remember the unbreakable hope of the Gospel found in Jesus Christ and pray for countries like Zambia, where every one is either “infected or affected” by HIV/AIDS.

Zambia 2015 (information below taken from Avert)

“In 2013, over 54,000 adults and 12,000 children became newly infected with HIV in Zambia.1 These figures represent the plateau of HIV prevalence in the country since the mid-nineties; HIV prevalence is neither increasing or decreasing. At its height, HIV prevalence in Zambia was 14.5%, and as of 2013 is still high at 12.5%.”

“One in every eight people in the country are living with HIV, and life expectancy is just 58.1 years.3 However, this is a considerable increase from the 2012 life expectancy of 49.4 years, partly thanks to improved access to antiretroviral treatment.”

Children, orphans and HIV in Zambia

“Children have been severely affected by the HIV epidemic in Zambia, where 150,000 children are estimated to be living with HIV, alongside 600,000 children orphaned by AIDS.”

“However, these figures are declining and Zambia is expected to reach its target of reducing new child infections by 90% by the end of 2015.19”

“A huge part of this progress is due to the implementation of a rigorous prevention of mother-to-child transmission (PMTCT) programme, which has seen the percentage of children born HIV-positive drop by 51% between 2011 and 2012.20 Over 96% of women received PMTCT support in 2013, meeting universal target levels.”

“Latest data also shows that 60% of men under the age of 50 have never been tested for HIV, and only 33% of young people have tested. Couples counseling and testing is also extremely low in the country, despite this being an effective route to testing more people for HIV elsewhere.”

“A study in 2012 found a combination of reasons explaining why people were not testing, including a fear of stigma, rejection by their sexual partner, a fear of antiretroviral treatment, and a belief that traditional medicine would keep them healthy if they became ill. These beliefs are ill-informed, but also reflect the continued stigma around HIV in Zambia.”

When You’re in Ground Zero

Ground zero is defined as, “a site of devastation, disaster, or violent attack.” It seems like it would be pretty obvious to someone to know if they are in “ground zero.” And most of the time, it is. But sometimes you can be in ground zero and not even know that you are there. For instance, the HIV/AIDS epidemic in Southern Africa is very deceiving, and one can hardly realize where ground zero is, until you find yourself there, in that “site of devastation, disaster or violent attack.” That happened to me (Derek) on May 28th.

The CROSS Project HIV/AIDS ministry that we coordinate has been helping out at a local feeding program that happens three times a week for over a hundred children who are all HIV positive. Mostly, we help with some counseling, basic medical care, and some administration work. However, it is run and operated out of a local church in George Compound by Pastor Wozifera and his wife, Easter, both of whom are on staff with ACTION Zambia.

Pastor Wozifera sent me a text on Monday morning, May 26th, and informed me that Vera, one of the children from the feeding program had passed away at a local hospital that morning – the funeral was on Wednesday. Myself, Pastor Wozifera, Easter, and Eta, one of our national workers with CROSS, all went to the funeral. Vera, who was only 14 years old when she died, had lost both parents to HIV and was living with her grandma, so the funeral was held at her grandma’s church. Because I was the only westerner attending the funeral, Pastor Wozifera, Eta, and myself were quickly ushered to the front of the church and were instructed to sit near the family (an awkward situation that many Westerners find themselves in).

As I sat across from Vera’s family in the front of the church and started to think about the situation with Vera and what led to her death and what was being said in the funeral, I realized that I was in the middle of ground zero of the HIV/AIDS crisis in Southern Africa. And the reason that I knew I was there was because of the silence about HIV/AIDS that pervaded the situation with Vera and the funeral itself.

Vera’s family never told her that she was HIV positive. Vera found out about her HIV status inadvertently two years ago through a staff member at a local clinic. This led to Vera feeling a lot of bitterness and anger towards her family for not sharing her status with her and wondering why this was happening to her. Why did she have to get HIV from her Mom at birth? She had done nothing wrong. Right before her death, Vera confessed that she had stopped taking her ARVs (immune system boosting drugs that help suppress HIV) for the last year. She did this out of bitterness, anger, fear, and the depression that she was feeling over her HIV status; because of the silence and mistrust that had grown between her and her family; and as a way to rebel against her family and, in some way, get back at them. Pastor Wozifera said he also felt that Vera had never really accepted or, probably in may ways, understood her HIV status and all that it involves.

The characteristic silence during her life spilled over into the funeral. There was no mention of HIV or why Vera had died. The Pastor officiating at the funeral did not take the opportunity to talk about how important it is to share one’s HIV status with their family, to talk to the affected children about HIV, etc. HIV/AIDS was completely left out of the the entire funeral service, even though the entire reason why the funeral was happening was due to HIV and the unnecessary and tragic consequences in a young girl’s life because of silence about HIV.

Going to Vera’s funeral and burial was extremely sad, because her death was so unnecessary and she was so young. But it was also a powerful reminder to me of why we are here in Zambia and that the ministry that we are doing with HIV/AIDS and churches (the CROSS Project) is so important. There is still a lot of work to do, a lot of prayers to pray, and the hope of the gospel to share! 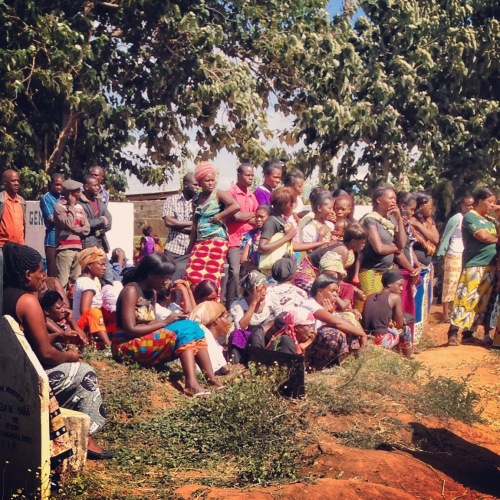 A picture taken at Vera’s funeral

This entry was posted in ACTION Zambia, CROSS Project. Bookmark the permalink.