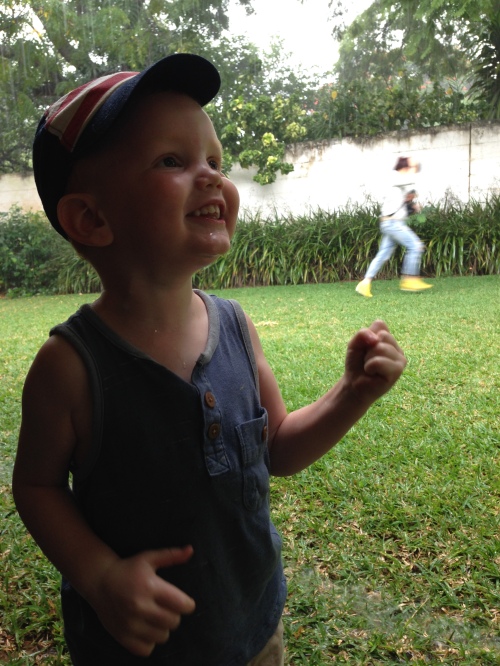 Ever since we have been back in Zambia and increasingly in the past month or so, Charlie has been talking a lot about Papa (his Carlson grandpa) or Papa’s house. We hear such things as…

When struggling to put shoes on his big feet, he says, “Need Papa’s horn” – as in shoe horn.

Or we are building a train track and run out of pieces, and his American, not-used-to-any-lack self says, “Go grocery store Papa’s house buy choo choo track.”

Or if he doesn’t like what Derek or I have told him, he says, “Go Papa’s house,” as if Papa will take his side.

Out of the blue the other day, he said, “Decorations be broken Papa’s house…next week.”

We have told him that we will be going to Papa’s house, but not for a while. So, almost every night before bed, he says, “Go on airplane Papa’s house wake up.”

(As you can see, we’re still learning about prepositions and the many tenses of “be…” verbs). 🙂

This week, some teammates and friends of ours (Andy and Beth Rice) finished their time in Zambia and returned to the States. Most children here refer to older non-related adults as either auntie or uncle. But Charlie, on his own accord, decided that Uncle Andy was more of a “G-pa.”

G-pa and Auntie Beth stayed at our house for their last couple days, and then Derek took them to the airport. Charlie has been very curious since yesterday about where they are at each moment. He knows that they left in an airplane to go to America, so he tells us that “G-pa Auntie Beff go bye-bye in airplane Papa’s house.” Or when he heard a small propellor plane fly over our house yesterday and again today, he says, “Oh! There he is! There’s G-pa!”

But it occurred to me that, in Charlie’s mind and for all he is concerned, Papa’s house is America. And when people get on airplanes, they are going to Papa’s house.

Of course, all this coming and going of other people and us brings up TCK (Third Culture Kid) issues that we are learning to deal with. If you are ever interested in reading more, there was a fabulous 3-part blog that has been so helpful as we help Charlie work through the hello’s and goodbye’s and transition of life as we currently know it.

It is hard for an almost-3-year-old to understand these big concepts. But one thing is for sure. When we get on that airplane in a couple months, he will know that we are going to Papa’s house.

One response to “Papa’s House = America”