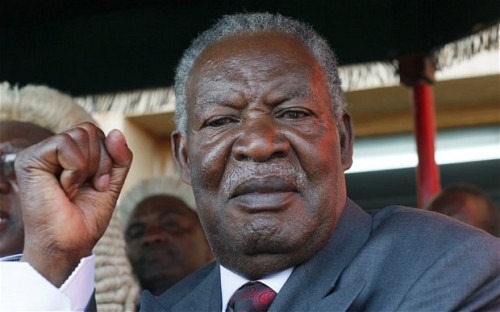 Article from The Telegraph – found here.

“Michael Sata, the 77-year-old Zambian president nicknamed King Cobra for his tough-talking, has died in a London clinic after a long spell of ill health that has caused uncertainty in the copper-rich southern African country.

Under the constitution, Mr Sata’s white Vice President Guy Scott should now take over until elections in 90 days, but he is barred from taking office because his parents were not born in Zambia.

Diplomatic sources said the president’s death in office, and jostling for power within his Patriotic Front party as well as among those in opposition, could spell a period of instability in the former British protectorate and possible outbreaks of violence.

Mr Sata, a staunch Catholic and father-of-eight, passed away at 9pm on Tuesday night after being admitted to King Edward VII Hospital near Regent’s Park in London., the Zambian government said.

Dr Roland Msiska, Secretary to the Zambian Cabinet, said Mr Sata’s wife Christine Kaseba, a doctor, and his son Mulenga, the mayor of Lusaka, were at his side.

“It is with a very heavy heart that I address you today, to inform the nation that our beloved President and Leader, His Excellency, Mr. Michael Chilufya Sata has passed on,” he said in a statement issued at 8am this morning, around three hours after reports began to circulate.

At present, the acting president is the defence minister Edga Lungu but several ministers including the former Justice and current finance ministers have been tipped to take over.

Mr Sata was a chain-smoking former Victoria Station railway porter and trade unionist who famously challenged growing Chinese dominance in his country before ousting incumbent Rupiah Banda from power in elections in September 2011.

His victory saw the former British protectorate take its place among a select few in Africa who changed their ruling parties change twice, democratically and peacefully, since independence 50 years ago.

Diplomatic sources said his death, after two unsuccessful attempts at the presidency and just two and a half years at the helm, was a “Shakespearean tragedy” which could prompt some instability.

Under Zambia’s constitution, the Vice President should step in as Acting President until an election for a new leader within 90 days of the death of the president.

Mr Sata had been largely absent from the public eye for two months and had stopped chairing cabinet meetings or seeing journalists outside of the state media.

In June, there were reports he had died after he disappeared without explanation, and then was reported to be receiving medical treatment in Israel. Mr Sata missed a scheduled UN General Assembly speech because he had fallen ill in his New York hotel.

At the state opening of parliament in September, he joked about the false reports of his demise, but journalists were prevented from going too close to him or speaking to him.

One minister was overheard complaining that the country’s leader was an “absentee landlord”, while opposition parties sought court orders to try to force the government to explain his state of health.

Among those who paid tribute to Mr Sata yesterday was South Africa’s African National Congress, which described him as “popular for his modesty and focus on the poor and disadvantaged”.

James Thornton, the British High Commissioner to Zambia, said Mr Sata had “cared deeply” about his countrymen and his country’s development. “During his Presidency Zambia continued its rapid economic growth,” he was quoted as saying in the local media. “His government invested heavily in developing Zambia’s infrastructure, and has made some good recent progress in areas such as civil service reform. His Government was particularly active in promoting the rights of women and girls.”

Mr Sata moved to Britain in the early 1960s and worked first in a laundry in Bromley, then at the Vauxhall car plant in Luton, then at Victoria Station and London Bridge first as a porter, then a shunter, then conductor and eventually British Rail driver.

“I swept London Bridge, I swept Victoria and I enjoyed it. If I went to England and I was treated like a gentleman, I would not have had any resolution to look after this country,” he told The Telegraph in an interview shortly after coming to power.

A dominant force in Zambian politics for more than 20 years, the former trade unionist defected from Kenneth Kaunda, the independence leader’s party, to join the opposition then served as Minister for Local Government, Minister of Labour and Minister of Health under President Frederick Chiluba.

A diplomatic source said Mr Sata’s death in office was “tragic”. “It’s a real Shakespearean tragedy because this is someone who spent his whole life looking to be president and he finally got the reins of power then was too sick to govern and died in office,” he said.

The source said it remained “unclear” what will happen next. “The cabinet will need to vote on who will be acting president,” he said. “There’s no doubt there will be some infighting and there is also a tribal element but it’s never come to the fore before.

“The Patriotic Front winning the next election is not a certainty although opposition groups are also divided.

“So far it’s business as usual but it will be a few tense days as we watch for the smoke from the chimney to announce an interim leader. I would expect some isolated cases of violence but they will most likely peter out. Zambians have a peaceful history, have already lost one president in office and the country’s police and security forces have always behaved professionally.”

This entry was posted in Africa, Politics, Prayer, Update about Zambia. Bookmark the permalink.