The Long and Winding Road of the Cheetah Head 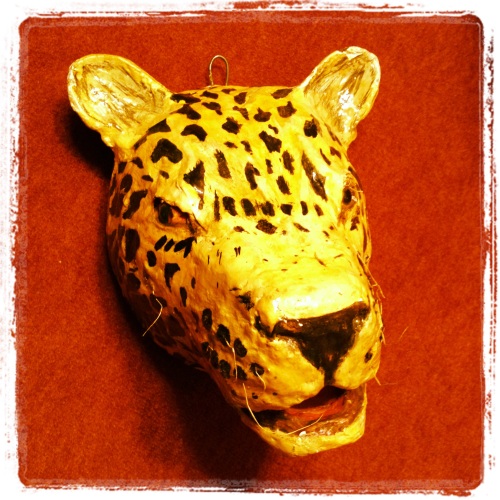 You might be wondering what that scary-looking cheetah head is doing on our blog, right? Well, if you have a few minutes, let me tell you the tale of the many miles and milestones this cheetah head has been through…

Back in 2003, Kristin Dearth (then Carlson) and Gina Hobbs (then Brandini) received a lovely paper-maché cheetah head from a street boy named Kelvin as a gift. When Kristin and Gina were leaving Zambia in April of 2004, they just didn’t quite have enough room for the cheetah head in their bags and left it with me (Derek).

The cheetah head followed me through a couple of living quarter transitions, but sometime before Glenn and Liese Ripley returned from their home assignment in the spring of 2005 I hung it up on the wall in the kitchen at Camp Timothy. There it would stay forgotten to the world until the Stranbergs moved into Camp Timothy and noticed an interesting cheetah head hanging on the kitchen wall.

I left Zambia in October 2005 with the cheetah head still gracing the decor of the Camp Timothy kitchen. But in May 2006 when Blake Walburg (then Walburg) was leaving Zambia to come back to America, the Stranbergs gave the cheetah head to Blake to give back to me, even though they had really liked it hanging up in their kitchen.

So, Blake gave it to Kristin and myself for a wedding present. Since Kristin and I had been so happy to receive back the cheetah head for such a special moment in our lives, we wanted to share it with some of our friends as well…

When Blake and Melody Walburg got married here in the Twin Cities in 2008, we gave them the cheetah head.

Blake and Melody then gave it to Shawn and Gina Hobbs out in CA for their wedding in 2009.

Shawn and Gina gave it to Steve and Kacey Ripley for their wedding in 2010 down in Kentucky.

Steve and Kacey then gave it to Nathan and Lydia Michels for their wedding in 2012 back here in the Twin Cities.

Then Lydia gave it back to us for a baby shower we had this past week!!

So there you have the riveting tale of the cheetah head. It’s probably not as riveting as “Merl the Squirrel,” but it’s a charming little story nonetheless. This paper-maché cheetah head is now almost 10 years old and is starting to crack and look a little faded. But it looks pretty good for traveling from Zambia to Minneapolis…out to San Jose, CA…down to Kentucky…and back up to the Twin Cities…and has now been present for 6 milestones – 5 weddings and a baby shower.