With some rioting up in the Copper Belt and some upheaval in Lusaka today over the election results being delayed, Lusaka is now like a ghost town as everyone waits for the presidential election results to come in. From what I have seen on the news, the election is really close. And there will most likely be rioting by the party who’s guy loses the election narrowly, which is almost certain to happen.

We got a call from Tim Hilty today at 4pm letting us know that if we needed any groceries there was only one place still open near our house. We then realized that we were out of a few things that would be good to have (like more TP), especially if unrest is going on for the next few days. It was pretty crazy driving to the gas station, not because of unrest, but because there was hardly anyone around. Hardly anyone was walking on the side of the road or driving on Kafue Road (pictured), which is normally packed with cars and people on a usual Thursday evening at 4:30pm. 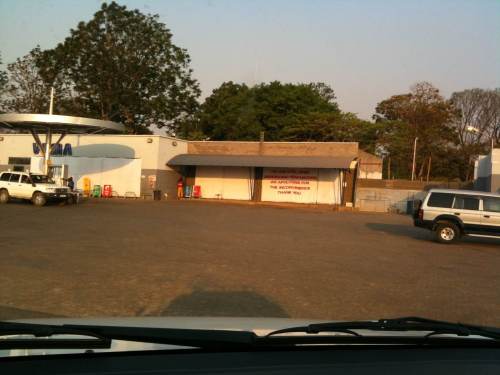 (Gas station in front of our house boarded up and closed)

Please continue to pray for Zambia as the election results will come in in the next 24 hours and the ensuing political unrest that is almost sure to follow.

You can find out more at: BBC Africa and Reuters Africa about the election.