A letter of thankfulness… 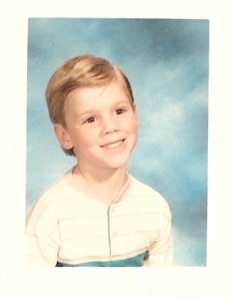 The year was 1989, a year filled with history (like all years). Some of those historical events were the first President Bush becoming president, the Tiananmen Square protests, Mikhail Gorbachev elected president of Russia, the Dow Jones Average passed the 2,500 mark for first time, the ground breaking began in Minnesota on the world’s largest mall, and Queen Elizabeth II knights Ronald Reagan. Besides these historical events and many others, I had my own major historical event happening. I started kindergarden and, thus, my educational career.

To say that I didn’t like school was an understatement. I hated school and everything about it. You know those children that go to school and look forward to learning new things and being around other children? And then do you know those other children that are shy, scared, bolt out of the classroom the moment school is over and don’t excel academically? Yeah, I was the second of those two types of children.

School felt like a prison of busy work to me. I could see the value in some of the things we did (recess, gym, lunch, the day being over) but struggled to see the value in other aspects of school (the process of learning, reading, writing, science, and math). School for me was a wave of doing better academically and then drifting down, of trying hard and then not trying hard. So kindergarden and 1st grade were pretty poor; 2nd through 3rd grade were okay; 4th grade was horrible; 5th and 6th were okay; 7th-9th were the pits. But I finally did pick up the pace by the end of my 9th grade year. This was mostly because my dad threatened to bar me from getting my driver’s license, and that got me going all of the sudden on this new strategy of learning. It went like this – listen to the teacher, do the homework they assign, and remember the same material for the tests. That worked like a charm the rest of high school. It was amazing how much easier school was when I actually listened to what I was being told and tried to remember it for later recognition!

So there I was at the end of my public school career – a classic underachiever, not doing horrible throughout my educational career and, for the most part, even turning it around the last three years of high school. But I did not at all learn to the best of my ability. I left school feeling a few different things. In high school the Lord really did some amazing things in my relationship with Jesus, and I really felt my faith becoming my own and not just my parents’ or my church’s. So I was getting really excited about my relationship with Christ, the church, youth ministry, and missions. I was also feeling that if I did venture into college, I didn’t want it to be about getting a degree just so I could make money and have a nice house, car, clothes, and life. I wanted to do something with my life that would glorify Christ. But I was also apprehensive about going to college. Maybe I was an underachiever like I suspected, or maybe I really wasn’t that smart. Maybe the reason why I did mediocre in school was that my brain was mediocre in it’s ability to learn.

So, what happened? Well, originally I was going to be a police officer after high school and even sent in my application to Fox Valley Technical College to start the training. But after going on a couple of mission trips to Thailand in high school, I really didn’t want to be a police officer anymore. So, I worked after high school and prayed that the Lord would show me what to do. I also took two distance ed classes through Oklahoma Baptist University during this time (Old and New Testament Survey) in a regional classroom. As many of you know, God led me to Zambia with ACTION for a year and a half where I worked with street kids and also met my wonderful wife, Kristin.

That leads me to the letter of thankfulness. After Zambia, Kristin and I both felt that we needed more education before we returned to the mission field. Kristin got her nursing degree and is now an RN. I really felt that I should get more Bible knowledge and training before returning to the field.

So, through Mark Russell (whom I had car-pooled with to OBU regional classroom before Zambia), I heard about Moody Bible Institute’s online degree program. Besides getting more formal education, I also wanted more church experience, so I contacted Pastor Wade Hetrick from my home church in Appleton about me becoming an intern there for a year. My original thought was to make the internship more of the central piece and take some classes on the side through Moody. But Wade really felt that it would be better to switch those two priorities around and, for that, I will be forever grateful. Wade was an enormous encouragement to me that first year of school and even after we moved back to the Twin Cities. He encouraged me to keep going, helped with homework and was always there to bounce ideas off of. He also knew that I did not have a learning problem but a motivation problem and was very good at motivating me and pressing me to try and work harder. Without Wade I would not be here today at the end of this degree.

I have to also mention that Annette, Wade’s wife, was also always asking me how things were going and was a wonderful encouragement to me. I am so thankful for the Hetricks, the role that God has used them in in my life, and their constant encouragement with going through these past four years of school!

I also want to thank Kristin’s parents, Terry and Connie, and my Dad for also being such an encouragement to me these last four years. They were always quick to ask how school was going and were ready to say kind and encouraging words to me and Kristin.

I also want to thank Kristin’s grandma, Grace. We have been able to live at her house for the last three years through school and even now as we get ready to go to Zambia. It is through her generosity of giving us a place to live that we have been able to pay for all this schooling. Living at her house has been a tremendous gift to us and something that we will be forever thankful for.

Out of anyone, Kristin has borne the brunt of me going to school. Kristin is a women of true grit. Her faith never wavers, and she never doubts God’s sovereignty or goodness, even through this stressful time of me going to school. She has read literally hundreds of my papers to look them over and give me her thoughts and check for all my grammatical errors. She has been such an encouragement to me over these last four years in her actions and prayer for me and in her constant love to me. She has dealt very kindly with me in my stress and has also taken on the bulk of our financial load for me to be able to go through school. This has been such a gift! And I am so thankful for her and love her so much!!

There are many others to thank, like so many people from church and family and friends, and I do not have the space here to go through and thank you all by name, but thank you so much for your love and support!

Finally, all praise and glory goes to God, who gave me insight, strength, encouragement, grace and love to get through these last four years. I am so thankful that He has given me this gift – to know His Word better and to know Him more fully.

With thankfulness and praise to God,