In sharing about our time in California, I’m going to use some pictures as word substitutes, so get ready! (The answer key is at the bottom).

Derek and I had a great time in Silicon Valley. We flew into San Jose on Wednesday night and found a

waiting for us in the parking ramp. By the time we got to bed, it was almost 1:30am on our biological clocks, so we were pretty exhausted.

After we finally woke up on Thursday, we headed out to San Francisco to see

, whatever else tickled our fancy, and then stop by a beach on our way back to San Jose. What we discovered while in San Fran was that it is not only 10-15 degrees colder on any given day than the surrounding cities, but on that particular day it was only about 55 degrees out with a blustery wind adding to the chill! We were definitely not prepared for that.
While enduring the chill out on the pier like good sports , we saw

.
We got someone to take our picture with a classic San Fran landscape in the background.

After crossing the Golden Gate Bridge, which was mostly covered in fog, we tried to get on the right freeway for the beach but ended up taking an interesting tour of the steep streets throughout San Francisco. I’m pretty sure we went over a street with one of the highest inclines (something ridiculous like 31.5 degrees) where you feel like you’re in an out of control rollercoaster.

It was pretty intense. But as we wove through the narrow streets, we saw some typical San Francisco-esque

.
After we finally got unlost, we didn’t have time to go to the beach, so we just went back to San Jose. I got to see some good friends at a Zambian-style bridal shower for Gina, called a Kitchen Party.
All day on Friday, we helped Gina get the church set up for the wedding and reception, attended the rehearsal, and then went to the rehearsal dinner, which was in a very lovely

setting.
Saturday was filled with getting ready for the wedding, getting pictures taken, being in the wedding

, and hanging out with great friends afterward. Oh, but Derek did manage to go to the

just south of Davenport beach while I was getting ready for the wedding. As you can see from the picture, there wasn’t much beach, so he still has never been in the ocean, but now has at least seen the ocean in person.
On Sunday, we said goodbye to the Mediterranean-style 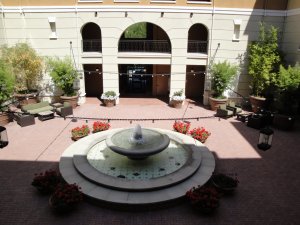 apartment we stayed in. We also said goodbye to the surprisingly cold weather and happily greeted the sultry Minnesota warmth.
Although we did not get to swim in the ocean or visit Apple’s world headquarters, we still had a fun time in California and really were awestruck with God’s beauty in the mountains, ocean, and palm trees.
***In case you had a hard time figuring out the pictures, here is the answer key:
1: Range Rover
2: Pier 39
3. The Golden Gate Bridge
4. Alcatraz
5. Hundreds of sea lions barking, basking, and probably mating
6. Derek and me with San Fran in the background
7. Steep street
8. Houses close together
9. Golden foothills
10. Derek and me at the reception
11. Ocean
12. The courtyard outside our apartment door

This entry was posted in Fun, Marriage. Bookmark the permalink.